It's Silent Hill, only terrible! 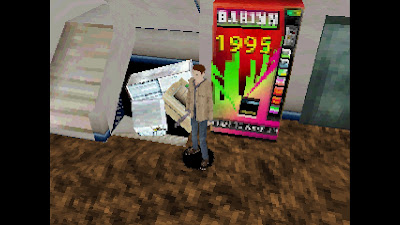 Some things have to be seen to be believed, and Back In 1995, the latest game to try and exploit nostalgia to sell a shoddy piece of shit recapture the atmosphere of old-school horror games - most notably, Silent Hill - is one of those things. I could go on and on about everything that the game does wrong and everything the developers misunderstand about the appeal of the games they're trying to ape, and to some extent I will, but trying to offer a reasoned analysis of Back In 1995 seems like trying to do an autopsy on a Lovecraftian being: a sure recipe for insanity and mad ramblings.

So this time around, I decided to go for something a little different and just show you some of the highlights from the game. As such, be wary that unlike most reviews, this one is very spoiler heavy. And while this game is certainly in running for worst game I've played all year, I... kinda recommend it, actually. It's not cheap, especially for what it is, but if you have 12$ and two hours of your life to burn, it is one of the most uniquely bad gaming experiences you'll have in life. Ideally, I'd picture people playing this and then coming back to this review so we could all laugh about it together, like you would do with The Room or any other movie of that caliber. If you just want a sample of the wrongness that is Back In 1995, though - please proceed.

Also, since I feel like this might come off as nit-picking, I would like to stress that this is all I'm giving you here - a sample. The entire game is nothing short of a disaster, and it had me with my jaw open the entire time barely managing to wrap my head around the last stupid thing that happened just as another stupid thing came to take its place. I was honestly holding back, and I still had my finger on the screenshot key for almost my entire playthrough.

Having said all that, let's get right into this shit. Literally. 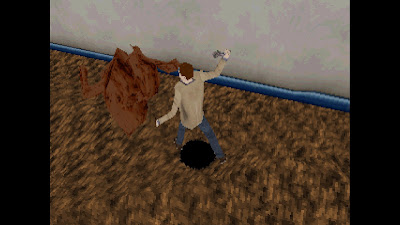 The turd monsters were the first thing people noticed about Back In 1995's trailer, and the most obvious sign that there was no hope for this game. Of course, a good horror game relies mostly on atmosphere and a feeling of uncertainty to inspire dread in the player, but it's rare for survival-horror to work without a tangible threat that could be lurking around every corner. Once you realize your main baddie in the game is the most laughable thing you could possibly be fighting, it's hard to maintain any fear or suspense. Especially when you realize said baddie can be stun locked and killed in three melee strikes, and that, incredibly, you can sometimes kill it by hitting it through the goddamn wall.

To say the game is badly written is a massive understatement. As you will see below, it's not a language issue, because the developer is capable of expressing himself in English quite competently. It just seems like everything about the game and the setting has been an afterthought. 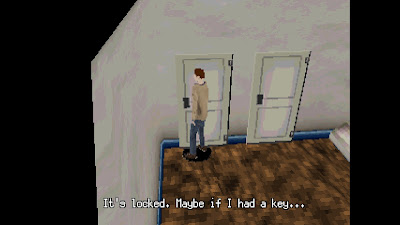 Yes, I'd imagine having a key to a door would help you open it. 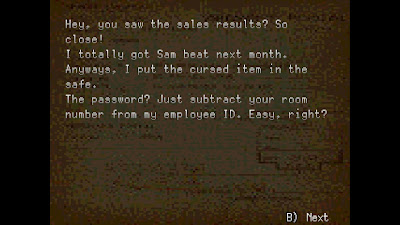 I communicate with my co-workers this way all the time. But hey, at least it's better than the puzzle where you have a 3-digit padlock and you need to figure out the combination and uh... oh. 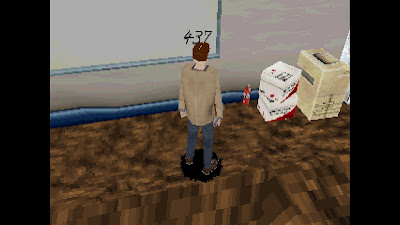 That's not the only time the game treats like an idiot, either. 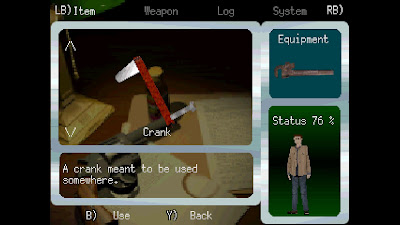 An item in a video game that needs to be... used? You have to use it... somewhere?

Very often, it seems like the developer didn't even bother to make sure that the text actually describes what is shown on screen. Quality assurance? What's that? 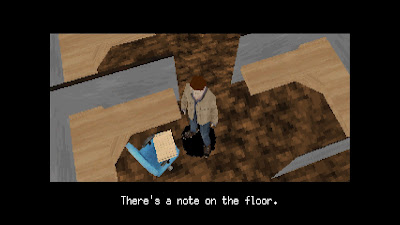 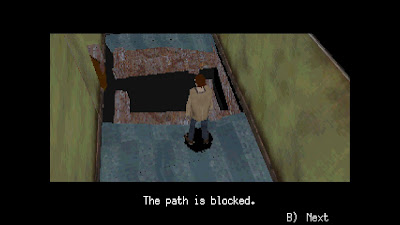 Nope, that's just a hole in the floor. Pretty sure you could jump right past it, too.

I have no words.

After going through a few rooms, you find the other main enemy in the game - a weird pink bird-looking monster. 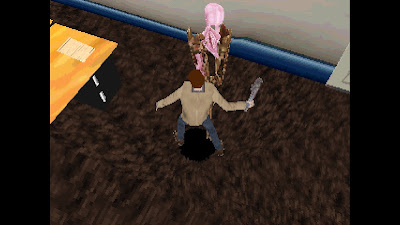 This one takes all of four melee hits to go down, and is stun-locked just as easily. In fact, the only monster that can't be stun-locked with melee is the third and final monster, which serves as a boss of sorts, and which - embarrassingly - actually managed to startle me, mostly due to having a semi-competent reveal in the midst of a lot of dumb shit. 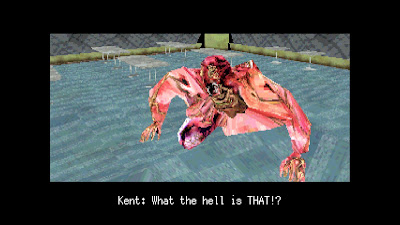 However, that effective moment is wasted as soon as the cutscene ends and the monster starts... walking in the opposite direction from you. 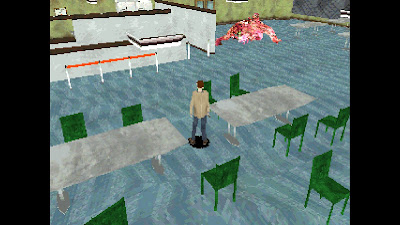 This thing has absolutely no interest in me.

Almost every narrative-based game has to force you to visit specific locations in a certain order to get the effect the developer was aiming for, but few games are as transparent about it as Back In 1995. At one point in the game, a character called GP sends you to retrieve some documents for him, at which point you get the following dialogue: 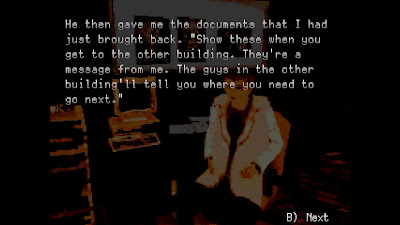 What... you gave me back the documents? Why didn't you just tell me to take the documents to the other building in the first place, you ass?

When you do get to the next building, you're supposed to be startled by a guy calling out to you, which would have been far more effective if you couldn't just... see him on the roof right there well before it happens. 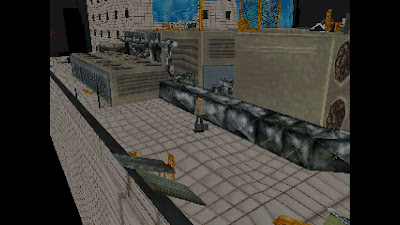 Of course, if you try to take the documents to the next building without going back to GP, you get this message: 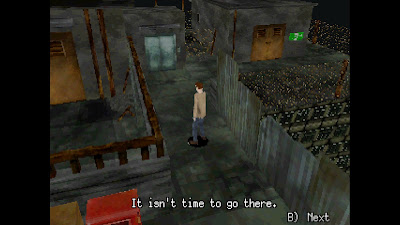 Whoa whoa, relax, player. This isn't a world we've built for you to explore and interact with. You do what we tell you, when we tell you. This is a game where a door you need to go through remains locked until you read all the data logs lying around - which are, as we all know, the best story-telling device you can have in a video game. 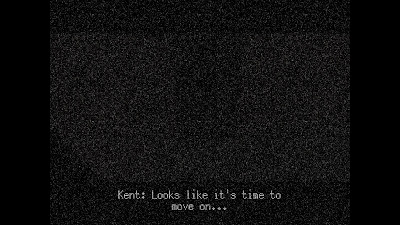 Insultingly, this game actually forces you to wait a few seconds before you can skip a page of text, as if it's really important that you read through its sad attempt at a story.

It's become all too common for developers to have this strange pride in their work that is in no way reflected in actual game design or technical attention to detail. I don't expect ground-breaking visuals from indie games, but you can often see the love and effort poured into the better ones. Then there's Back In 1995, which takes forever to change camera angels even when you move through an entire area where you can't see your character:

Or this actual camera angle from the game: 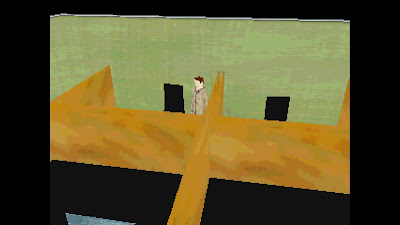 Or this door that you can only open if you're not right next to it:

But hey, at least there aren't really obvious bugs, like clipping through large objects in a very limited space, right? 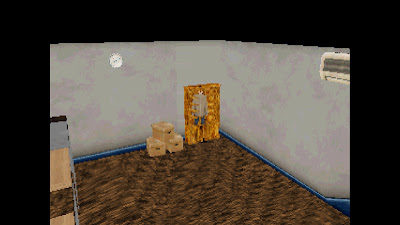 But is there any merit to that story that the game is so desperate to tell you? You may be surprised to find out that no, not really. It's extremely predictable, and it doesn't help that very early on, you come across this painting marked as being from 2013: 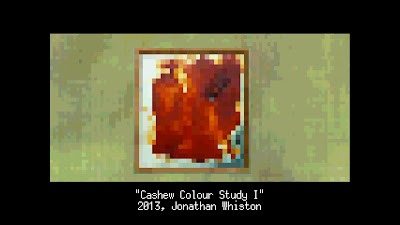 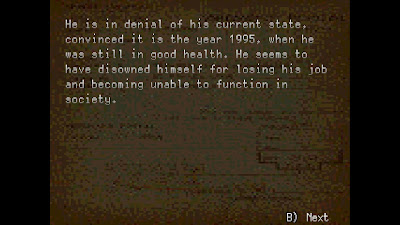 Well who could see that coming? But it's all building to a really important point, people: 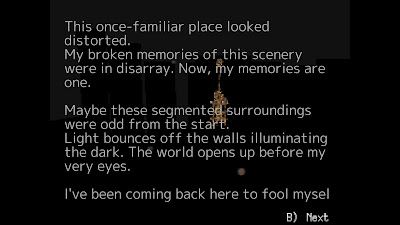 After a fake ending, the game returns you to the first area, where you find a flashlight that, once turned on, causes all the lights in the game to go out. It's another surprisingly powerful moment, threatened and scared than anything in the game leading up to it. 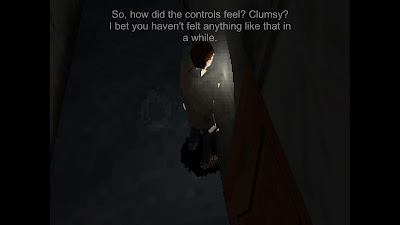 At least it would be, if the game didn't crash after the fake ending, and if a bug didn't prevent the lights from going out at the right moment. Again, the game wants to ape the great survival-horror titles of the 90s, but without the willingness to put in the hard work they did to make their brilliance shine through despite their technical limitations.

As a result, nothing about Back In 1995 feels genuine. As the developer himself says in the post-ending commentary that ensues: 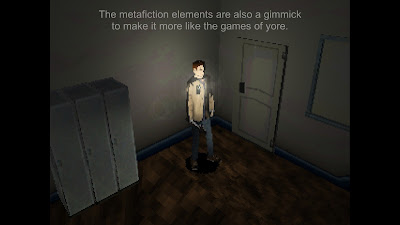 And that could be said about practically anything in Back In 1995: it's all a gimmick. Resident Evil had turret controls because the first PlayStation didn't have dual analog sticks. Silent Hill had fog because the PlayStation wasn't powerful enough to render the large environments Team Silent wanted to use. Why does Back In 1995 do anything that it does? Just because. Just to make you think of the old horror games you liked, in the hopes that maybe you'd like it by-proxy.

In fact, this seems almost conscious: 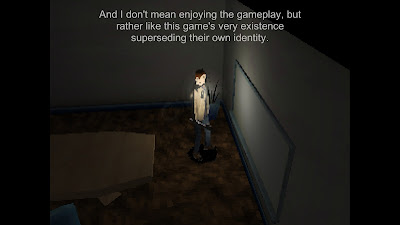 As far as the developer is concerned, Back In 1995 isn't supposed to be a piece of art or even entertainment. It's pure escapism, without merit in and of itself. But that's not what its inspirations were. People are still playing RE and SH to this day, but the vapid power fantasies of yesteryear have long been forgotten by all but the very nostalgic, just like the vapid power fantasies churned out today by the likes of Ubisoft and modern Square-Enix are destined to be. Escapism is shallow; media that invokes something genuine in the audience is timeless.

The developer goes on to express concern about the way games today are made and consumed. To me, this is the most troubling part of the commentary. Yes, there's a lot of garbage coming out nowadays. But as far as I'm concerned, we're living in a golden age of gaming - a time where there are more games appealing to more people than ever before. The gatekeeping, privileged attitude that games are being destroyed because they are not exactly like what they were in the 1990s has led to some pretty terrible stuff over the last few years, and Back In 1995 has hardly earned the right to claim to represent a superior attitude to gaming.

But the developer still seems satisfied: 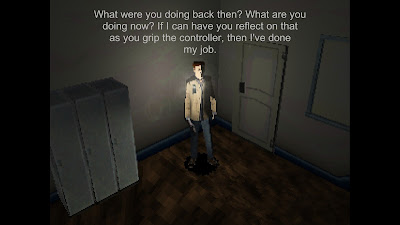 Fair enough. If the developer's job was to make me thing about games old and new, he certainly succeeded.

I'd think that a game developer's job is to make good games.

But what do I know, right? 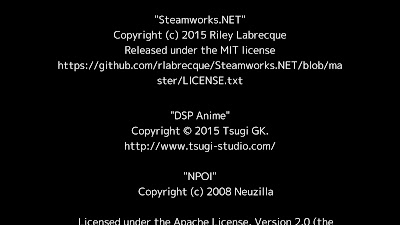 Ugh, I should've known DarkSydePhil had something to do with this.

Score Calculation: Well, it has two good moments, so that's a

Verdict: Turret controls, polygon graphics, clunky melee - I already left you, and you're better off left behind. I mean, If we're already doing out-of-context 90s references...
Posted by Unknown at 11:19 AM